Through ‘edutainment’, Hiccup Interactive seeks to demonstrate that games are an invaluable medium for empathy and understanding. Each project’s first priority is fun, then skill improvement; this is to encourage long term engagement and retention instead of front loading information.

Hiccup Interactive is a young, innovative gaming company with a commitment to the exploratory nature of learning through gameplay rather than high stakes competition. Our games have a clear learning objective and are challenging, yet we focus on crafting the space for learning through fun, compelling game design, rather than rigid and judgmental assessment.

The company has developed games aimed at audiences of all ages that have interest in the specific topic. Since Hiccup Interactive games focus on fun first, the games can be enjoyed purely for the sake of entertainment or for the explicit purpose of learning.  The company values player time and encourages replayability. 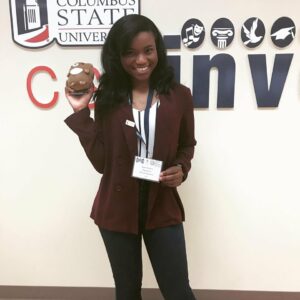 Karen is an eager game programmer with a passion for design. As a graduate of Columbus State University with a Bachelor degree in Computer Science, she is a game developer by trade. She initially designated Hiccup Interactive as a handle to uniquely identify her indie game development portfolio.

So, what started as a way to document her process as she pursued becoming a game designer has now become a full fledged indie game studio. Under Hiccup Interactive, she has worked on projects from edutainment to board games with the goal of utilizing common game mechanics in non-traditional ways.

Just months after establishing Hiccup Interactive,  Karen won the Silver Excellence Award for Best Design for “Malintent”. In 2019, she was elected as a Board Member of the International Game Developers Association (IGDA)’s Atlanta branch. As an active IGDA and GGDA member, Karen has spoken on various game development panels at game events and conferences.